1960 Mercedes-Benz 300SL Roadster with Less than 15k Miles and Stored for Four Decades with One Owner. 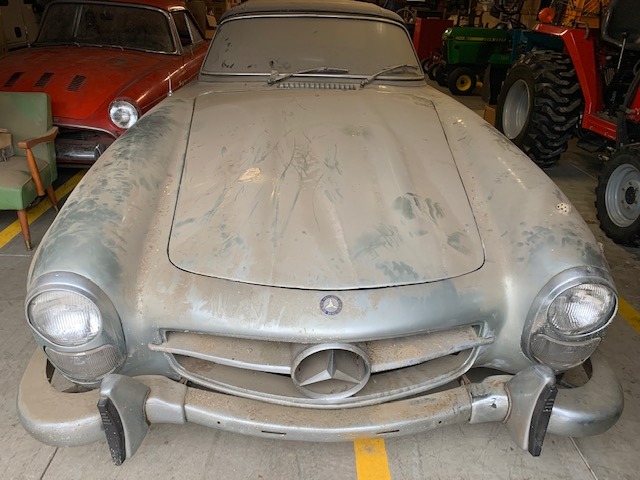 Few models in the history of the automobile possess the thoroughbred bloodline of the Mercedes-Benz 300 SL Roadster. Descended from the dominant W194 competition cars and production Gullwing, the 300 SL Roadster, introduced in May 1957, represented a further refinement of this well-established, yet innovative sports car design. Although the Roadster retained the advanced space-frame chassis, fuel-injected three-liter straight six, and fully independent suspension of the Gullwing, its conventional doors, revised cockpit, improved handling, and increased power made it a much more comfortable, well-rounded machine. The 300 SL Roadsters unique combination of world-class performance, elegant styling, and extraordinary build quality earned it legions of admirers and the new open-top model outsold the Gullwing despite a significant increase in price. In all, Mercedes-Benz produced 1,858 examples of the 300 SL Roadster between 1957 and 1963.The 300 SL Roadster presented here is an extraordinary find, recently purchased from the estate of its long-term owner and fresh from over four decades in static storage in Indiana. This 1960 model, one of only 249 examples built that year, was delivered new to the US and was originally finished in the rare and very sophisticated color of Blaugrau (Blue Grey), code DB166G, with black leather interior.

A previously unknown car (the Gullwing Group Register lists only the chassis number and no known owners), this car was in the Chicago area in the early 1970s and acquired by its previous long-term owner around 1976. He was inspired to own a 300 SL after driving in his brother’s Roadster. Soon after purchasing his very own 300 SL, he parked the car in a warehouse where it remained hidden from the public eye for the next 40 years. 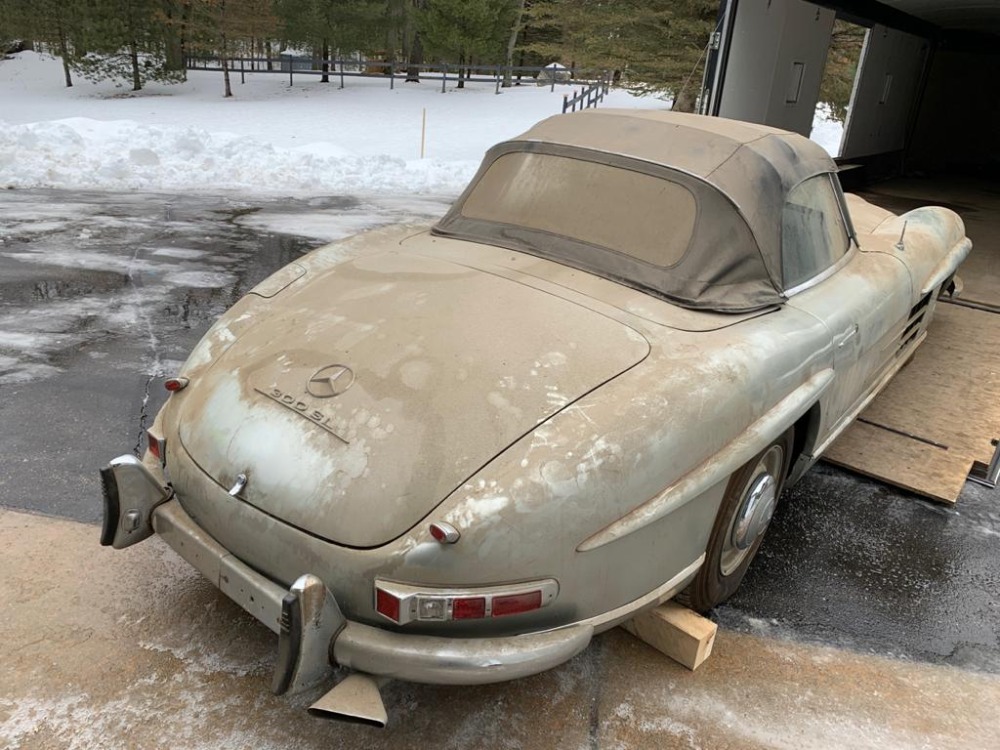 Today, this incredible matching-numbers 300 SL shows just 14,558 original miles on the odometer, which is consistent with its superb original black leather upholstery and an intact service sticker (dated September 1973) from Knauz Continental of Lake Forest, Illinois. The Mercedes-Benz is offered with a factory hard top, soft top, and jack.Here is an extremely rare and exciting opportunity to own one of the very last unrestored, barn find 300 SL Roadsters in existence – a fantastic car with a very rare original color scheme, one private owner for over 40 years, and less than 15,000 original miles! 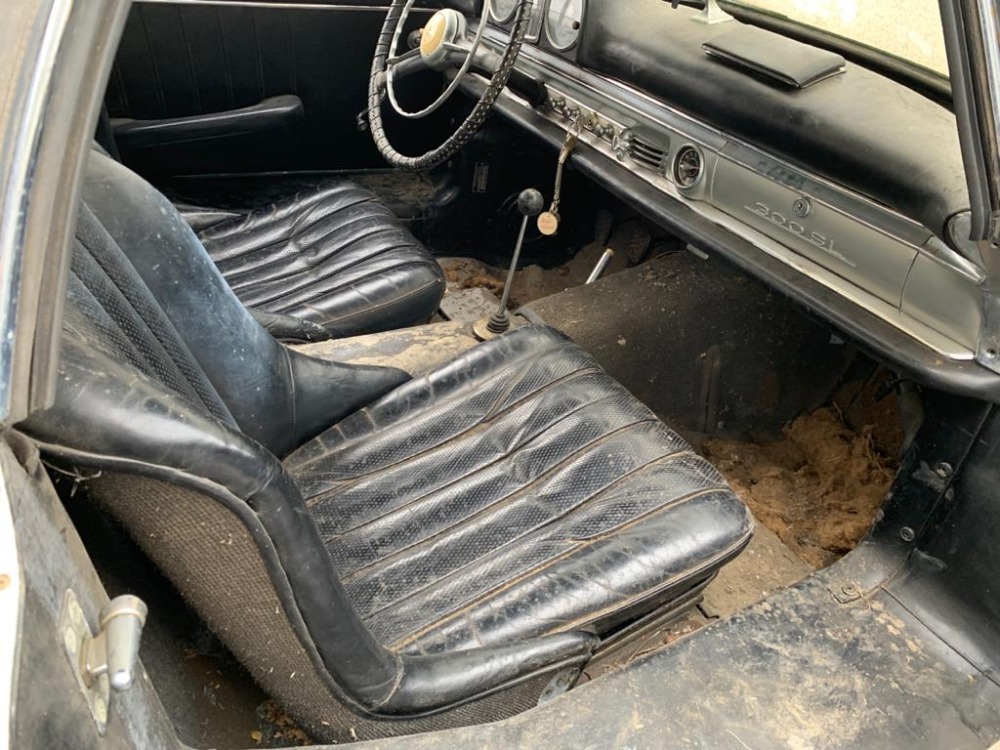 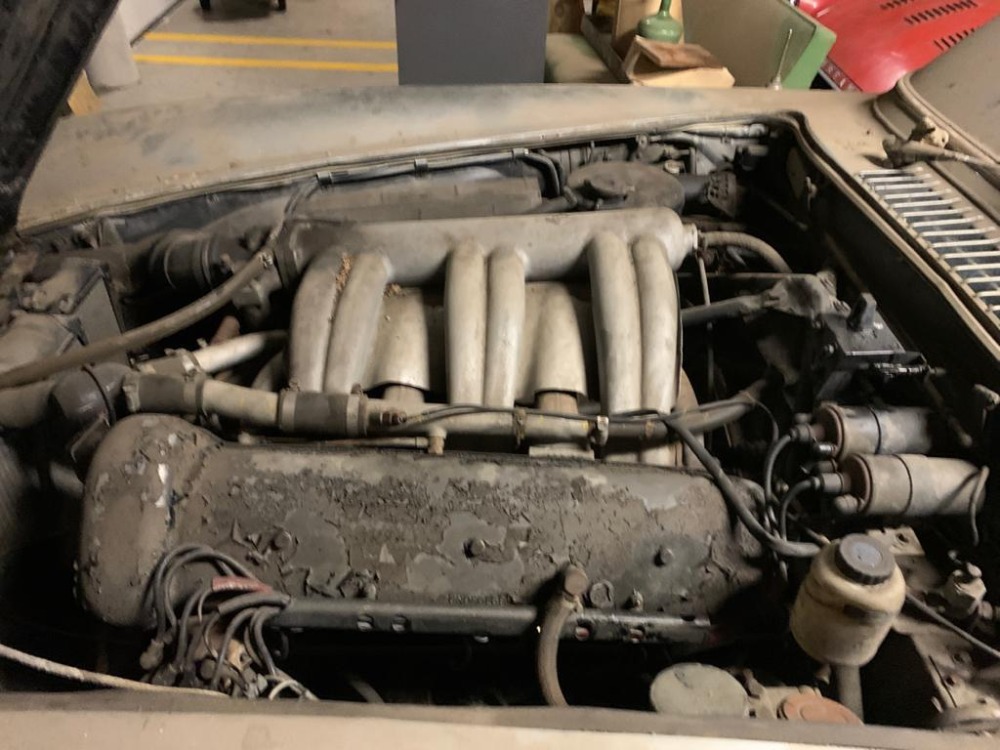